I am totally hooked on Open Water Swimming… 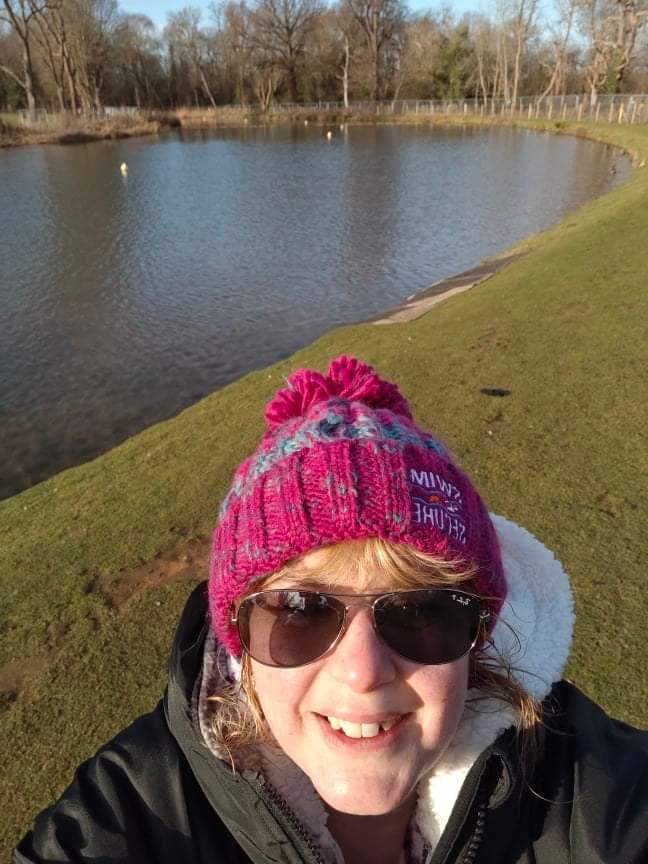 I am a new-ish ‘recruit’ to open water swimming, having only started in Spring 2021. But it’s fair to say I am totally hooked and now a passionate advocate for the many health benefits that it brings (some scientifically proven, some anecdotal experiences from our ever-growing community).
Having spent the past 4 years feeling like my world was shrinking due to the musculoskeletal pain (and subsequent low moods) caused by fibromyalgia, I saw people swimming in a lake in the summer of 2020 and thought “I want to do that”. I love swimming, but utterly hate swimming in a pool. And didn’t know there were any other options. Plus, I was worried about safety, water quality and whether I could manage it (as well as being seen in a swimsuit or wetsuit, as four years of little activity had not been kind to my body shape).

I didn’t know how to go about it, but eventually stumbled on TriSwim – and saw all over their website that they wanted open water swimming to be accessible to everyone. And that they have lifeguards and test the water quality. That was my three biggest fears addressed head on. So, I took a (very) deep breath and booked a session. On the week leading up to my first swim, I was TERRIFIED. For all the reasons set out above. But, oh my, I LOVED it.

I felt free. The joy of movement and the rhythmic nature of the swimming started to calm my incredibly over-active brain. I was in nature. I SO enjoyed watching the wildlife (and some fish) and I realised I did not have to emulate other swimmers and pound round laps. I could also stop and enjoy the moment and sights around me. Guess what – that’s akin to meditation and it also helped calm my brain.  And I discovered some really friendly people who encouraged me (big shout out to Jo here). All this, combined over time, saw a reduction in my symptoms- even on days I did not swim – and a significant increase in my mental health. I started swimming multiple times a week. And found it was the best way to de-stress after a bad day.

The cold water also helped abate my pain both while I was in the water, and back on land (I later found out it was helping me start to retrain my nervous system to be less reactive, which is a big part of what causes fibro pain). Yes, swimming hurt (a lot initially) afterwards – and in new areas, like my lower back. But whereas, before, an increase in pain would send me scuttling back to my sofa, I was determined it would not stop me swimming. The change it brought to my life, mentally as well as physically, was too great to give up. I found ways round it (if you have lower back pain – the PhysioRoom float is amazing). And over time, that calmed down too.

Seeing my joy after each swim encouraged my husband to try it (he had declared there “was nothing he wanted to do less” when I first announced my intention to give it a go). And guess what – he is hooked now too! As well as this my 10-year-old stepson, who suffered horribly from anxiety throughout the first year of the pandemic, decided he wanted to try it (with a little nudge) too. And he also loved it. To the point he is taking swimming lessons now to improve his technique so he can swim better at the lakes.

Hubby and I are now regarded as the ‘mad ones’ by many friends and family as we’re still swimming, even as the water temps drop closer to freezing than double figures (in a wetsuit, I’m not ready for skins in this weather. But I take my hat off to those that do). We own more swimming kit than I used to know existed. AND I also completed a charity swim in the summer that saw me swim 5K in a month (largely at Haysden). If you had told me that back when I started that I would do that, I would have told you it wasn’t possible.

So, if it’s something that you are thinking of doing – don’t let fear of the unknown hold you back. As a well known advert says – just do it! You’ll be safe with TriSwim, and I suspect you won’t look back.